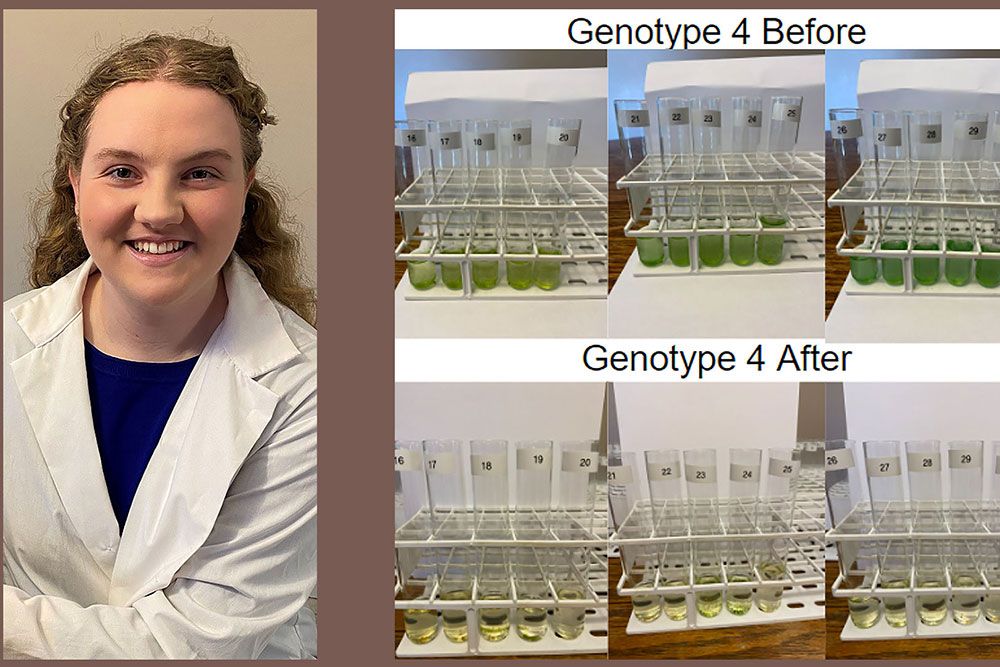 Genotype 4 was also able to produce significant algae decreases in all of the different algae combinations, based on the student's research.

An interview with Annabelle Rayson

Lake Huron is well-known for its beaches, sand dunes, habitats and having the longest shoreline of the Great Lakes. Those of us who live close to this Great Lake are truly lucky to be able to appreciate it all year long. Lake Huron can be relatively cold at some times of the year but it is mighty and beautiful.

Our Great Lakes are at risk, however, from a number of threats. Fortunately, there are passionate people determined to find solutions to the issues. One of those people is 16-year-old Annabelle Rayson. Annabelle is a Grade 11 student from St. Patrick’s Catholic High School in Sarnia. She has set out to combat algal blooms in the Great Lakes.

Now, let’s step back for a moment. What are algae, anyway? Algae are aquatic organisms that float on the water. They lack any true stems, leaves, or roots. So how can a simple, aquatic plant-like organism do so much damage?

The ability of algae to thrive is magnified when excessive nutrients, such as fertilizer, running off of fields, residential lawns, and other surfaces and washing into streams, rivers, and creeks, eventually reaching our Great Lakes. This build up of excessive nutrients is known as eutrophication.

The ability of blue-green algae to thrive is magnified when excessive nutrients, such as fertilizer, run off of fields, residential lawns, and other surfaces and wash into streams, rivers, and creeks, eventually reaching our Great Lakes.

This can lead to the algae reproducing quickly and creating an ‘algal bloom.’ The blooms cause issues but the deadly part is from decomposition of the algae producing a bacteria, including cyanobacteria or blue-green algae that use up all the oxygen in the water, creating anoxic environments or ‘dead zones,’ where plant and animal life cannot flourish.

These algal blooms are not good for our lakes, wildlife, or even us but Annabelle is on the path to work with nature to fix that.

Annabelle has been competing in the Lambton Country Science Fair since Grade 4 and has attended three national, Canada-wide Science Fair competitions.

“I love problem-solving, asking questions and I’m naturally curious,” she said. Annabelle goes on to say she’s enthralled with limnology (the study of freshwater and lakes) and even more passionate about our Great Lakes and helping solve the issue of algal blooms.

In her project this year, Annabelle’s purpose is to find a way to treat and prevent algal blooms that does not further harm the environment and is relatively cheap. To do this, she was going to ‘biomanipulate’ a population of zooplankton. Biomanipulation is the deliberate alteration of an ecosystem by adding or removing species. Zooplankton is a teeny, tiny organism that eats algae.

For last year’s science fair, Annabelle discovered Daphnia magna (a type of zooplankton), compared to other zooplankton, reproduced quickly, and ate the most algae. Therefore, hypothetically, by adding more Daphnia magna it could eat the harmful algae causing anoxia environments. Furthermore, Daphnia magna is a naturally occurring keystone species to our Great Lakes, meaning it is so important it defines the ecosystem. Without it the ecosystem could collapse.

Since Annabelle already discovered Daphnia magna was the zooplankton for the job, this year her experiment was to make sure it could withstand different environmental variations.

“Our Great Lakes are very dynamic, so I had to make sure the genotype [genetic makeup of Daphnia magna] continues to eat algae and not cause harm to the surrounding environment with all the different conditions in our lakes,” she explained.

“In my experiment, I compared the abilities of four genetically distinct genotypes of Daphnia magna to consume algae to see which one would be better to biomanipulate to protect freshwater ecosystems from algae blooms and then tested the most effective genotype in different environmental conditions to discover its success in the ever-changing Great Lakes.”

So, after five experiments, what were Annabelle’s findings?

“In short, Genotype 4 is the ideal genotype of Daphnia magna to biomanipulate to treat and prevent harmful algae blooms, can effectively do this in nutrient and plastic polluted environments as well as in a variety of levels of algae toxicity, and can have their health and success improved through calcium carbonate and naturally occurring aquatic microbes.”

When asked what her next steps would be if she could continue with her research on Daphnia magna, Annabelle said “I got to work a bit with University of Guelph, and it would be amazing to continue working with them and taking these experiments into the field.”

After listening to Annabelle explain her project and hearing her passion on the topic, it is no surprise that Annabelle is moving on to the Canada-wide Science Fair (held virtually the week of May 16, 2022). It is no doubt that Annabelle has a bright future, and we can’t see what issue she tackles next. Best of luck in the nationals, Annabelle!

Since we first published this article on May 16, 2022, 16-year-old Annabelle Rayson, a Grade 11 student from St. Patrick's Catholic High School in Sarnia, received the Stockholm Junior Water Prize and will be heading to the Netherlands for the international science fair.

HRH Crown Princess Victoria of Sweden announced the winner during a ceremony at World Water Week 2022 (August 23 to September 1) in Stockholm.

Since our article, she has won several wards at the 2022 Canada-Wide Science Fair.

She is heading to the Netherlands in September 2022 to represent Canada at an international youth science contest.